The average EDI scores for each developmental area – Physical Health and Well-Being, Social Competence, Emotional Maturity, Language and Cognitive Development, and Communication Skills and General Knowledge – are divided into categories representing the highest scores to the lowest scores in the community and the province.

The total group of children who score between the lowest 10th and 25th percentiles of the distribution.  This represents a group of children who are not in the “vulnerable” range  at the time of the EDI assessment but whose scores are still lower than expected for children at that age. They are therefore called “at risk” for continuing on the low achievement and health trajectory. Children who are “not on track” (that is, vulnerable and at risk combined) are more likely to fall behind in later grades in academic achievement (Calman & Crawford, 2013).

Our reports focus on the children who fall in the “Vulnerable” category, which describes the children who score low (below the 10th percentile cut-off of the comparison population) on any of the five domains. This provides a glimpse into the groups of children who are vulnerable for problems in later childhood by casting a wide net that includes all children who may benefit from universal programs. It captures the children who are struggling, but not only those who are doing so visibly to have already been identified. This group represents children for whom cost-effective, universal preventive programs are likely to make a difference.

We can also display vulnerability in relation to community or provincial/territorial cut-offs to provide a more localized look at how children are doing. For example, the Peel region in Ontario may look at how specific neighbourhoods in Peel compare to the overall region. We also find that the lows for the regions based on the provincial or territorial cut-points are useful when we compare regions/schools/neighbourhoods across that province or territory. 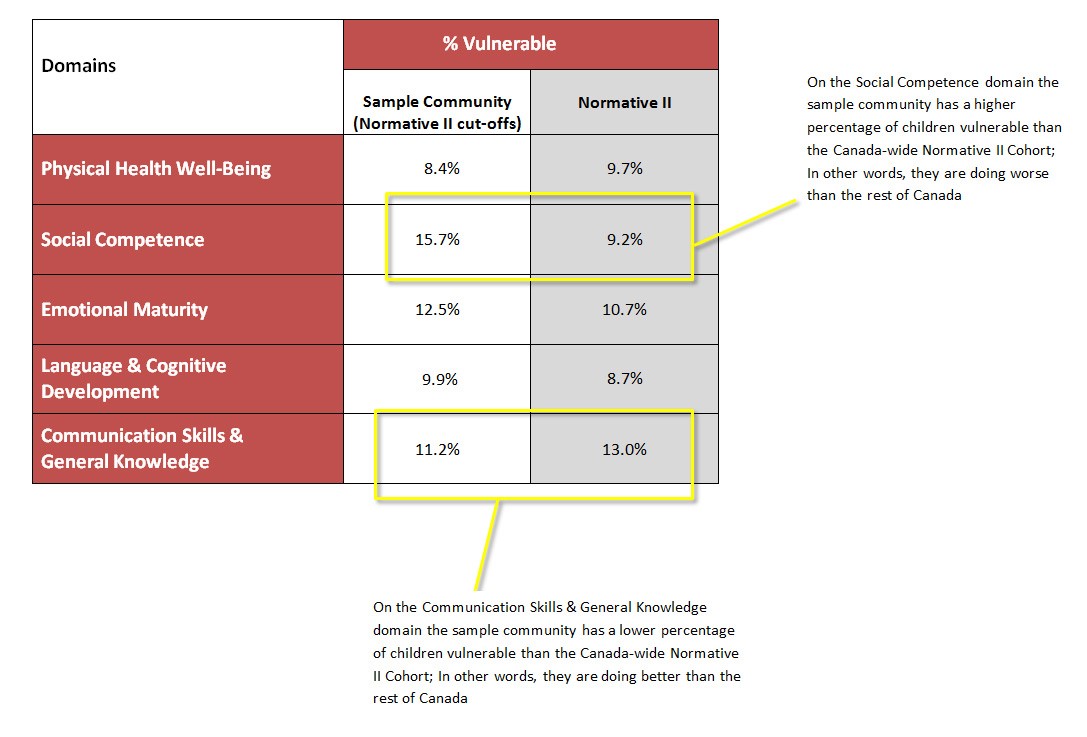 Scores for domains and subdomains on the EDI vary from 0 to 10.  Some subdomains represent skills that a child in kindergarten, based on his or her developmental age, is expected to have mastered already (e.g., physical independence).  Other subdomains represent areas of development that are still emerging (e.g., prosocial behaviour).  Subdomain profiles can provide an in-depth look at the areas in which children are performing strongly or poorly.

Children who reach all or almost all of the developmental expectations have an excellent ability to physically tackle the school day and have excellent or good gross and fine motor skills.