The second province-wide implementation of the EDI has taken place in Quebec, and the results show 27.7% of children are vulnerable in at least one area of their development. This is an increase from the 2012 collection, which showed 25.6% of children were vulnerable.

The results at a domain level largely mirrored the trend in overall vulnerability, with an upwards trend in all domains, except for Communication Skills and General Knowledge which stayed relatively stable from 2012 to 2017. 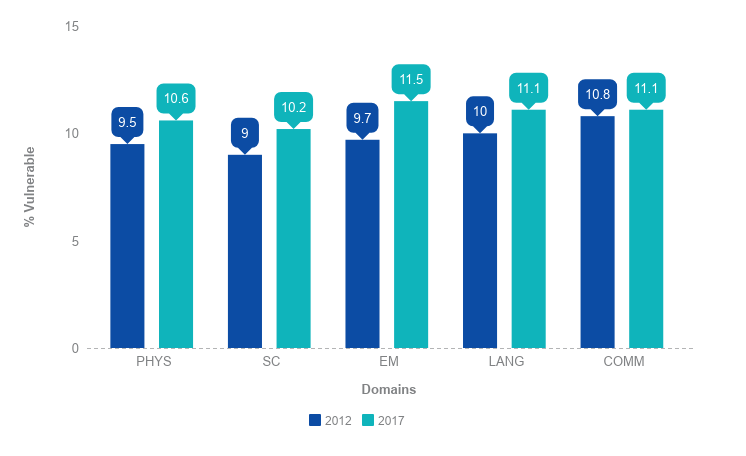 In some ways these trends are similar to what we see in other provinces, such as Manitoba, British Columbia, and Ontario. Like Quebec, vulnerability on the Communication Skills and General Knowledge domain is stable or dropping in these provinces.

In other ways these trends differ. In Ontario, British Columbia, and Manitoba, vulnerability is dropping or staying stable in Language and Cognitive Development, whereas it has increased in Quebec.

In trying to interpret these changes over time, it is important to consider as many factors as possible that may have changed in Quebec’s population characteristics and distribution between 2012 and 2017. For instance, are poverty rates changing? What about employment levels or preschool rates?

It’s worth noting, as well, that although Quebec’s vulnerability rates are trending higher in most domains, certain domains such as Physical Health and Well-Being (10.6%) are still substantially lower than the rates in Manitoba (12.9%), British Columbia (14.8%), and Ontario (16.1%). As reports raise concerns about children’s physical activity levels, are there certain lessons other provinces can learn from Quebec?

The Quebec results also include vulnerability based on the types of services a child received from a health professional at school. For example, 58.2% of children who received service from a speech pathologist were vulnerable on one or more domains, compared to only 24.7% of their peers. Unsurprisingly, these children were more likely to be vulnerable on the Language and Cognitive Development (32.0%) and Communication Skills and General Knowledge (39.7%) domains. However, these children were also more likely to be vulnerable on the remaining domains, highlighting the fact that issues children face in childhood often require a holistic approach to help them thrive.

In addition to the data collected on the EDI, an additional survey was conducted with a sample of parents to better understand important information not captured on the EDI, such as children’s preschool path.

Data from the original collection of the EDI in Quebec helped shine new light on children’s development and influenced various mobilization and intervention activities. The 2017 collection will allow for organizations to readjust and refocus their strategies to best help children and their families.