Inequalities starting in childhood often persist throughout life. Accordingly, researchers are interested in learning about potential ways to reduce these inequalities and give all children a more equal chance at future success.

A study authored by Patrick Ip and colleagues examined the relationship between family socioeconomic status (SES) and child development, as measured by the Chinese version of the Early Development Instrument.

The study included 567 kindergarten students from both rich and poor districts in Hong Kong.

SES was measured by:

In addition to collecting children’s EDI scores, the authors also gave parents the Home and Family Parent Questionnaire, to get a sense of children’s home-learning activities.

The authors made five predictions:

What did they find?

Every step up the socioeconomic ladder was associated with an improvement in a child’s developmental health, as illustrated in the graph below, whether measured by total EDI score or the amount of domains very ready or vulnerable. 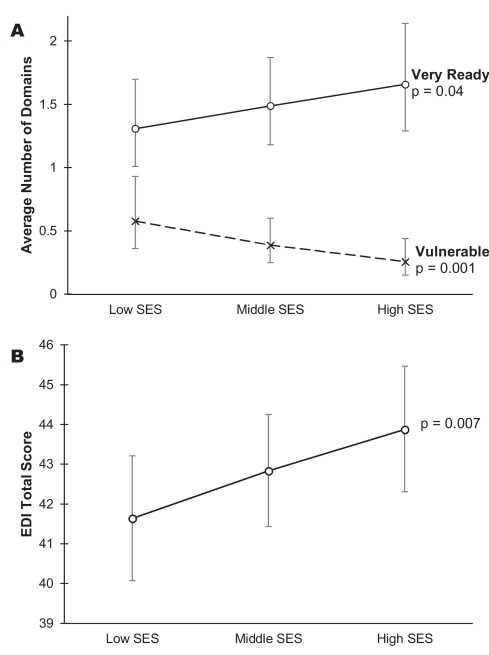 When the authors compared scores between genders they found girls performed significantly better than boys in social competence, emotional maturity, and communication skills but not in physical well-being and language and cognitive development. The hypothesis that the gender gap would be greater for children of the lowest-SES group was only true for emotional development. The gender gap was greater in overall development and communication skills in the higher-SES group.

When examining the EDI total score with a variety of parenting and teaching qualities, the authors found a significant correlation with parent-child reading activities, recreational activities, kindergarten teachers’ qualification, kindergarten teachers’ average teaching experience, average number of students in a class, and number of special facilities.

Once accounting for some of these variables the association between SES and the EDI total score became non-significant. The combination of play-based parent-child interaction (reading and recreational activities), kindergarten teachers’ average teaching experience, and the number of special facilities at the kindergarten explained 71.9% of the association between the SES index and the EDI total score.

What does it mean?

Like research from Western countries,a SES divide in early developmental health exists in Hong Kong , with children from lower SES households performing worse than their wealthier peers. The only EDI domain which this did not persist was emotional maturity.

However, this association was explained by better parent-child interactions, teacher experience, and kindergarten quality. Better SES itself doesn’t provide better developmental health for children. Rather, it is the opportunities available to those with higher SES. These families are able to send their children to better quality kindergartens and can devote more time to reading and play with their children, which in turn produces better developmental health.