Social-emotional skills play an important role in a child’s ability to succeed in school. These skills help with how a child adjusts to kindergarten and can help facilitate learning. New research from Australia focuses on two specific types of social-emotional behaviour to see the role they play in later academic achievement.

What is the research about?

The kindergarten years set the foundation for later learning and achievement. Social and emotional behaviour are important pieces of this foundation.

In this study, researchers looked at two important pieces of social and emotional behaviour: anxious and prosocial behaviour. The researchers wanted to learn about the link between these behaviours and academic outcomes. The study focused on both kindergarten and Grade 3 outcomes.

Previous studies often examined these behaviours in combination with other developmental variables such as cognitive development and aggressive behavior. While this provides important information on how these emotions act within a broad network of factors, examining anxious and prosocial behaviours separately allows for a more precise understanding of their effects.

What did the researchers do?

What did the researchers find? 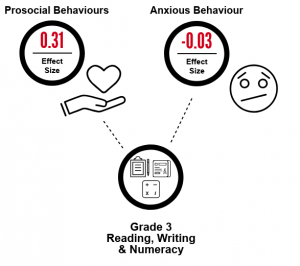 This suggests prosocial behaviour may help lay the foundation for academic success in kindergarten, which in turn leads to future success in Grade 3.

What does this research mean?