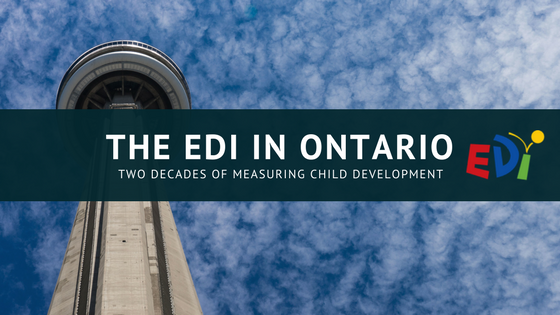 2018 marks the fifth full Ontario EDI collection, and the second completed in a single school year. The collection will be complete by the end of March.

But that’s jumping ahead. Twenty years ago, the EDI wasn’t even called the EDI. It was the School Readiness to Learn Tool. And there was a long road to developing the instrument before it could measure the developmental health of over a million children across Canada and around the world.

The process of developing the EDI items involved consultations with educators in the North York and Toronto District School Boards, in collaboration with the Early Years Action Group and the Parenting and Literacy Centres.

After finalizing the items, the instrument was tested for its cultural validity and implemented in all kindergarten classes in the Metro Toronto and North York sections of the Toronto District School Board.

In the early months of 2000, the EDI was implemented in five communities across the country in the federal Understanding the Early Years initiative (UEY), although none of them were in Ontario. Their EDI results were combined with National Longitudinal Study on Children and Youth (NLSCY) data and a community mapping study. These provided detailed information about the state of healthy child development in each community.

At the same time, the EDI kept growing in Ontario with five more communities, set up as a provincial version of the UEY: Ottawa, London, Near North Region, South East Grey, and York Region. These communities received their funding from Ontario’s Children’s Secretariat. There were between 700 and 1,500 children in each community. Several communities also approached the Offord Centre directly to use the EDI. That resulted in 18 communities, with approximately 45,000 students in total.

The next three years saw the EDI implemented more widely across Canada and the EDI database swelled.

By 2004, Ontario was ready to implement the EDI across the province. The Ministries of Community and Social Services and Children and Youth Services contracted the Offord Centre to establish a ‘readiness to learn at school’ baseline for all children entering kindergarten in Ontario. Between the 2003-2004 and 2005-2006 school years, 124,866 children were included in the Cycle I collection, and served as a baseline to compare all future collections.

Overall, 28% of children were vulnerable in at least one domain of their development.

Three collections have taken place since then, and in the past decade EDI data show that children’s developmental health is changing. Children are making strides in certain areas but are struggling in others.

In the last provincial collection, 29.4 percent of children were vulnerable in at least one domain of their development, a slight upwards trend over time.

Digging a little deeper we find that vulnerability is trending lower in the areas of Language and Cognitive Development and Communication Skills and General Knowledge. That’s the good news.

Unfortunately, vulnerability is trending higher in the areas of Physical Health and Well-Being, Social Competence, and Emotional Maturity.

Increasing vulnerability is a concern as it can predict a child’s lifelong health, learning, and behaviour.

Is this pattern unique to Ontario? The long-term trend is similar to British Columbia, yet differs in many ways from Manitoba. In Manitoba, vulnerability in the Emotional Maturity domain is trending lower and has remained largely stable in the Physical Health and Well-Being domain. In Ontario, these domains have the largest increases in vulnerability across all domains.

What sort of lessons can Ontario and other jurisdictions learn from Manitoba? And what lessons can other jurisdictions learn from Ontario? These are not easy questions and require examining lower-level community factors as well as higher-level government policies. There is no single solution to improving children’s healthy development and no single organization can accomplish change alone.

The completion of Ontario’s fifth collection will provide more trend data to help communities make decision on how to best support children’s development.